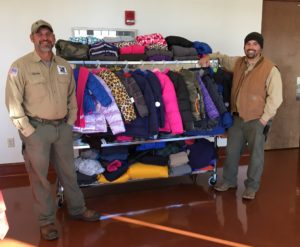 Baldwin EMC hosted its 11th annual Power of Giving drive on Thursday, Dec. 1, and the event’s organizers are calling it a huge success.

LifeSouth Community Blood Center was on site early Thursday morning and collected a total of 89 units of blood by the end of the day. Additionally, an unprecedented number of donations of non-perishable food covered three 6-foot tables and filled multiple boxes, which were brought in for the overflow. The food was then donated to a local food bank for families in need.
New this year, Baldwin EMC included a children’s coat drive as part of the campaign and was overwhelmed at the community’s response to this new portion of the drive.

Mark Ingram, Baldwin EMC’s vice president of energy services and public relations says the success of the Power of Giving drive is one of the most significant ways Baldwin EMC shows its commitment to the community, but without donors, it would not have been successful.

“We continue to be amazed at the generosity of this community, each and every year,” Ingram says. “All the planning and hard work that went into organizing the Power of Giving drive would have been for nothing if people didn’t take time to come make a donation. The Power of Giving is exactly that – whether the donation be blood, food or a warm coat, each contribution will help change a life in a positive way. That’s what this season is all about.”