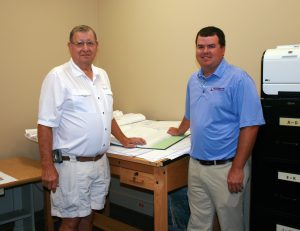 Mr. Edward Kinsey retired as a field engineer in 2000. We asked him to sit down with Sol Fleming, an engineer in Baldwin EMC’s South Baldwin district who came on board in 2015.

Sol Fleming: So you retired in engineering in 2000, but did you always work in that department?
Edward Kinsey: No, I actually started out on the line crew. My first day was April 14, 1969, and I worked the next 10 or so years on the lines. After [Hurricane] Frederic, I had a back injury and that was the end of climbing poles for me. It just worked out that this field engineer position opened while I was still out on sick leave, recovering. I applied, got the job, and that’s how I spent the next 20 years of my career.

S.F.: What kind of projects were you involved with at the time?
E.K.: Well, there was a huge shift after Frederic. First of all, these subdivisions were popping up everywhere and we were working overtime to get power to all these new homes. Also, that was
really when all of the underground work took off . I can remember working on these bigger developments, like Peninsula and Kiva Dunes, during a period when we had more than 50 subdivisions going at one time.

S.F.: But you got it done.
E.K.: We got it done. There were challenges along the way. You know, that was when West Beach really started growing, too. The engineers would get somebody that applied for service and we might go down there and see two or three different temporary poles. We didn’t have any city maps, so we’d have to get a meter number to find out if we were anywhere close to the address. We used landmarks for directions everywhere.

S.F.: You know, we’re set up now so that all I have to do is type a pole number into my phone and it will generate directions for me.
E.K.: Ha! We didn’t have GPS, we had guess work. There was a lot of trial and error, but we all worked together to get the job done.

S.F.: You had a 30-year career here. Do you think the co-op changed a lot during your time here?
E.K.: It sure did. It went from a “mom and pop” outfit to a phenomenal organization. Prior to my working here, Baldwin had a reputation of having the lights go out all the time because it was so rural. When D.R. Sutherland came on as general manager, he hired more folks and got us some contractors to get the lines and help us get the work that we needed. Of course, the landscape of the whole community changed, too. Especially the Gulf Shores area – once we got that underground going, we knew it was just a matter of time.

S.F.: Do you miss it?
E.K.: I miss the folks, but I sure have enjoyed retirement. I run into people at lunch sometimes, and I sure do like coming back and saying hello to people I know. You remember working with people and it all comes back, all the stories I could tell.